Hello,
can somebody give me some tips on what is the best way to animate a firework explosion or at least make a effect that look similar? Thank You

There’s a particle template for Synfig. I’ve never used it, but seems it can do the job.
Link to the wiki: wiki.synfig.org/wiki/Particles
You can try experimenting with it.

The idea looks pretty interesting to me, so I will possibly make an example later.

So, I am returning to the animating stuff and first of all, I want to help PublicEnemy #3 with firework (actually, this idea is interesting to me as well).

To understand what I want to do, see attachment with explanations.
How can I achieve it? I tried digging into the guts of particle template (mainly transform layer), but it’s too complex for me to understand how it works…

Off topic: Why all images I uploaded here is automatically sized down? E.g. I upload png 800x600 and it becomes 600x450. Are there some limits? 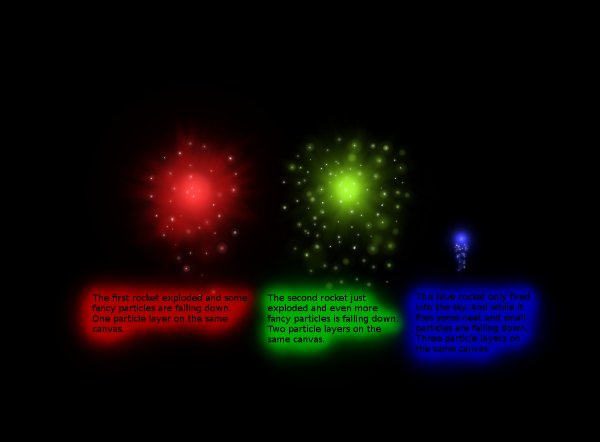 Thank you for your help! I have actually never worked with particles before. I am working on a animated series for youtube so im not doing much detail for now. I will first see how the show get received and if people like it, i will improve the animation. The first episode i am working on actually needs fireworks so i am trying to figure something out.

one particle template + explosion03.sifz (from this post) has “particle” is an interesting combination (but the result is’nt so fine has svarov’s one!)… will try to post a howto

So, with the help of black magic I was able to create a decent firework example.

You can check it out here: Particle exporter and firework example