Hello every body
During this project i am going to animate an eagle which is about to fly.first of all i draw just figure of that egale in one frame on paper then scane it in my computer .the next step would be change it to vector style i have two ideas
1-draw it in synfig by Bline tool
2-Draw it in Inkscape then import as svg in synfig(i find inkscape easier to work rather than synfig)
this is my first experiment on vectorization images an animating vectors so i have no idea which way would be more help full so please help me
here is image plan of that eagle 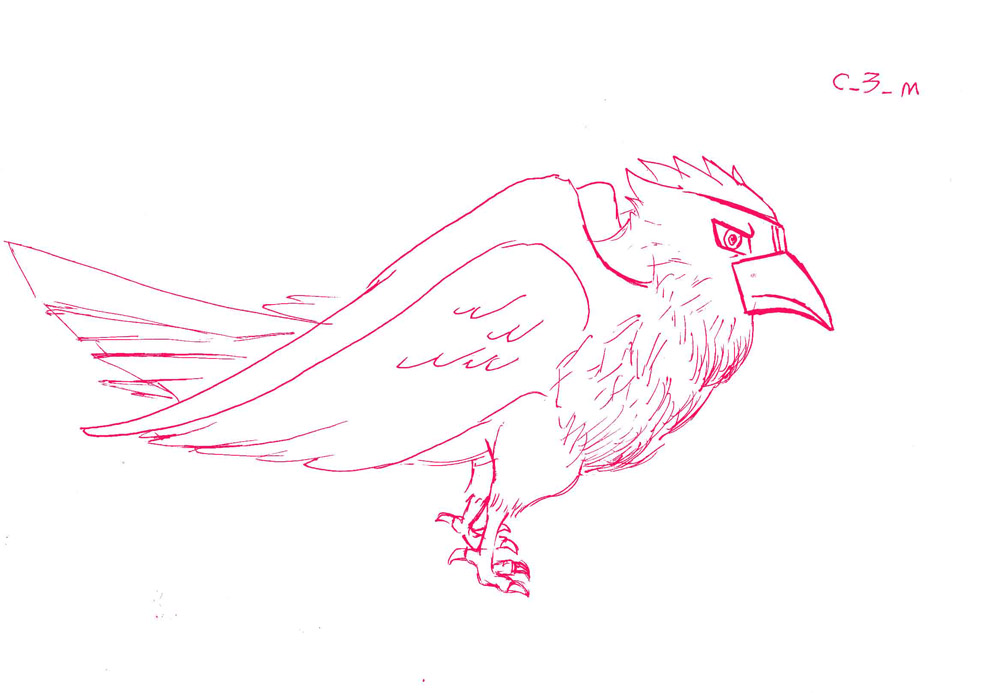 Hi Ichigo,
first of all please try to trace it in Synfig first. The resulting animation will be much more pleased and easy to do.
When you start doing such complex animation like an eagle fly you need to start first by drawing the keyframes. It is not needed to draw them very accurately but they should have the basic shapes involved in the character.
It seems that the main shapes involved in the eagle are:
-head (including all the details, at the end it is a compact design)
-wings. Each wing would be needed to be separated into different parts depending on the flying cycle.
-body (including all the details even the legs)
-etc.

So depending on the flying keyframes you would need to think on different compositions and if you want to morph the shapes or absolutely need to shift to other separated drawing for some parts of the animation.
In a first rough composition, I would divide the eagle in the following parts:
-head body
-tail pieces
-legs
-left wing: composed by wing pieces
-right wing: composed by wing pieces.
See attached image.
So I would add a rotate layer for each wing and tail pieces and link the rotation origin to some part of the body. Also for the wing turn I would change the wing piece color just when they are showing the rear part of the wing and shown in the image.
Hope that helps. Now imagine how complex would it be to draw the wings pieces in Inkscape and organize them for a animation setup like the one I propose.
-G 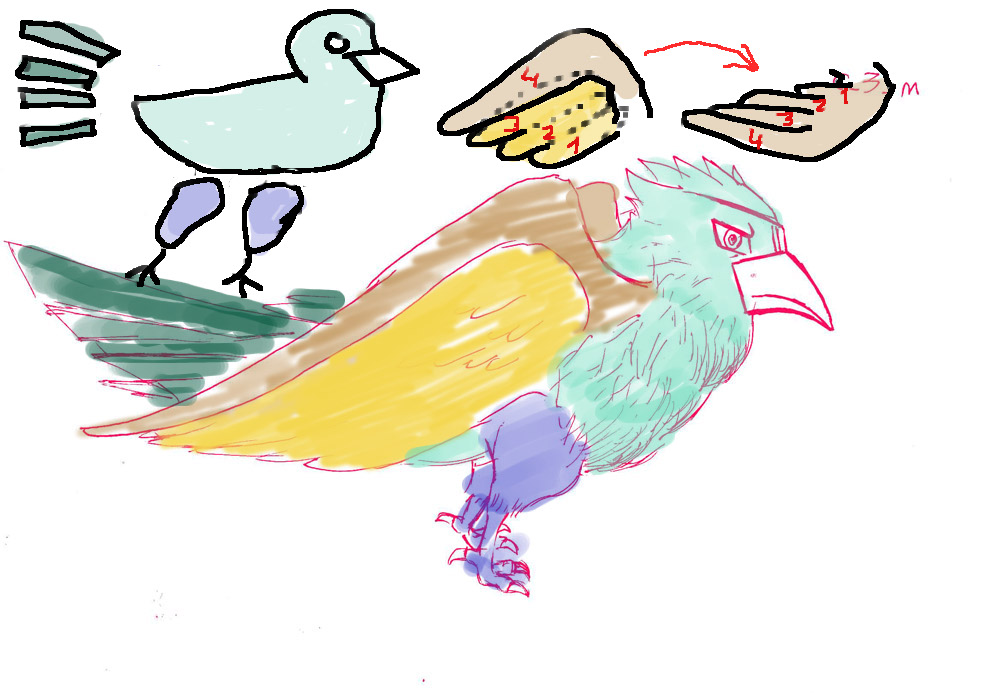 Hey, nice drawing. Genete is correct! You should try Synfig to learn more how it works. Always separate all body parts ,limbs to animate; the technique, well, you are the director, so you need to decide for each scene what are you going to use. Maybe a cut-out, or a vector morph for a limb…anyway you will need a basis to work with. The rough animation is a good solution to decide what you need. After the rought animation, you import the image sequence as a .lst into synfig.

Another good thing inside Synfig is the line Widht tool, with this tool you are able to control between two points, the line widht, so your illustrations get a “less computer look”.

Another tip: I’ve tryed a lot to draw with tablet inside synfig, it’s not a good idea if you need to control a lot of points, so you need to trace the rough image with the bline tool or the poligon tool.

Ricardo is right. The less ducks and vector points you get, the easier it gets to animate. That is why you should use the bline tool and draw directly in Synfig. Not only because the tools are better or worse than another program but that way you get used quickly to all the bits and pieces of Synfig itself. Most of the bird seems secondary animation. My three cents of advice is to focus on the wings. Change the color like Genete suggested is a good tip. Make a few good keyframes with pencil and brake it down to a few more so you can get a sense of the timing and animation and then import that sequence as a lst file to base your tracing on. The better the keyframes, the better Synfig will take care of the inbetweens. Good luck!
D.

Thx guys
i kind of like the working with synfig .thats fine !!!i am done with tracing the image in synfig .
ihave some problems with coloring the parts
anyway i didnt trace lots of details on eagle sush as feathers to make it easier to animating do u think this is a good idea?
eagle.sifz (20.1 KB)

i didnt trace lots of details on eagle sush as feathers to make it easier to animating do u think this is a good idea?

If you have lot of details, the keyframes (hand drawn keyframes) should be consistent with those details, if not you end with a messed up animation. The amount of details depends in the type of animation/style you have. The more details the harder work. When I have details I use to number them to keep track where each one goes in each keyframe.
Also I tend to trace in B&W and later colour the parts.
Keep it up!
-G