Hello.
I’m new with Synfig and I’m working on a Small animation Project called Damion.
I’ve been reading the wiki and doing some tests and tutorials, but there is still a long way to go.

I made this “intro” for Damion as my first attempt with Synfig:
http://youtu.be/-IcYunzlT1A

It’s not complete and is just my first attempt.

This is the first version of the characters design: 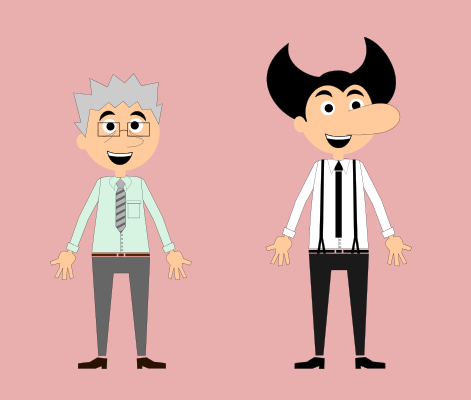 I could use some ideas and comments. What do you think?
All the best,
Gabriel

Regarding to the introduction it doesn’t cover a complex animation so I can’t say much more about it that it is good enough for a first attempt.

Characters look great. I like the special nose of the main character. Let’s see if his personality matches it. Please show us more about the story and the personality of the characters. Those two ingredients are the key of a suscessful animation.
Keep that style on the backgrounds, that is important too.
-G

Hello Genete.
I know. There is not much to comment on this first Intro Video.

The idea was to get going with Synfig. I’m doing a lot of tests and also learning how to use the program.
Today I finished my first attempt with a Walk Cycle: http://youtu.be/UQ6rcQbrB2E

It’s not much either, but it took me 3 days to finish. I think I learned a lot with it. Especially what NOT to do.

The rigging was quite difficult and I messed up a lot. 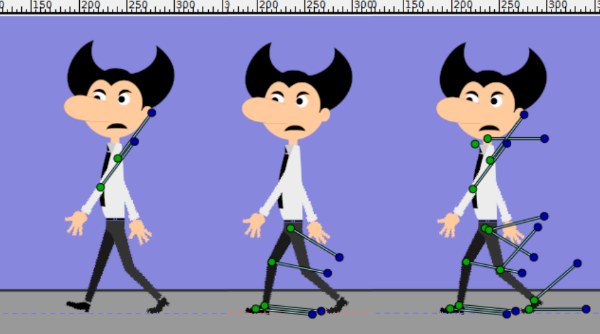 About the character, I used to do an Independent Comic about him. He hates his job at the School and wants to destroy it. So he does all these crazy things but never succeeds. He is supposed to be all EVIL and such, but as his attempts always backfire, he ends up being quite loved by all the people in the story.

Thanks for the comments. Getting help and advice is part of the game!

Hello to all again,
Just finished the first version of the storyboard. There is still a lot of room for improvement. Also did it without the complete dialogue, so, there are stuff that I will add later.

I hope to do the audio recordings next, as test for the voices (this should be fun

Canyon upload the image with higher resolution? Maybe host it by yourself and paste the link here.
-G

Regarding to the walk cycle, you can improve the feet sliding by using the onion skin.
Anyway, pretty good for first attempt.
-G

Canyon upload the image with higher resolution? Maybe host it by yourself and paste the link here.
-G

Sure!
Here it is, in Dropbox: https://www.dropbox.com/sh/wswhcm9n6dxml1f/AABsMEc6x7CTtWHsrxjUdoVZa?dl=0
Let me know what you think.

Regarding to the walk cycle, you can improve the feet sliding by using the onion skin.
Anyway, pretty good for first attempt.
-G

Thanks for pointing that out. I had read in the wiki about the Onion Skin, but haven’t used it yet. I’ll try it out ASAP!

The next step in the voice overs!! Just to get the feeling of it, and fun!

Wow, you have the hardest party very advanced!
You have a character, a story and a storyboard. Success us just a question of patience.
If you have time please do one animatic first. It would save you a lot if animation time later.

The past few days I’ve been doing some tests with Linux and Synfig. I was using Synfig on Windows and I was having problems, but now I’m on Ubuntu and it’s 100% problem free!!!
Today just to test Synfig, and Kdenlive (which I’m new to), I did this animation of a car:
http://youtu.be/aKJAIkjJmNw
Fairly simple, by the way. But its getting easier by the minute to use Synfig.

If you have time please do one animatic first. It would save you a lot if animation time later.

Sure!!! I agree 100%. The next step with Damion is the Animatic (with the voiceovers).
All the best,
Gabriel

Hey Guys,
I made the first version of the animatic. Made with Kdenlive.
http://youtu.be/GOfWQN7YfGE
This is just the first version, only to get the BIG picture. There is nothing special with it yet, just the same Storyboard in order and with voices (no acting).
For the next version, I hope to integrate more animations (I’ll use Synfig for that) , transitions and some voice acting.

What do you guys think?

What do you guys think?

It would save you a lot if animation time later.

So true, so true. Just by doing the simple version of the animatic I already discovered so many flaws in my idea, design, timing, etc. So glad that I started with that. It’s still a lot of work to do the “previs”, but it’s worth it.

I want to see it finish.

Hi!
Very cool! Looks great! Very nice to see someone making a character, a storyboard and an animatic first, before plunging into animating half blindsided.
Keep it up. I like your main character a lot.
Greetz!

Hi Gabriel, good work for a first animation. I noticed that you are using rotation layers to animate your character. Have you tried rigging a skeleton to your character? It’s a bit of work at first, but it’s much easier to animate after.