Our main developer (dooglus) and me (only by a little) are int he process of implement a bone system in synfig. For the moment there is only the core of the bones structure but we have started to develop the gui. This is the initial post and I’ll add more details to it as we are in the process of grow in the developing.

All the code is kept under git: repo.or.cz/w/synfig.git

Idea. What if every bone will be represented by a single layer? 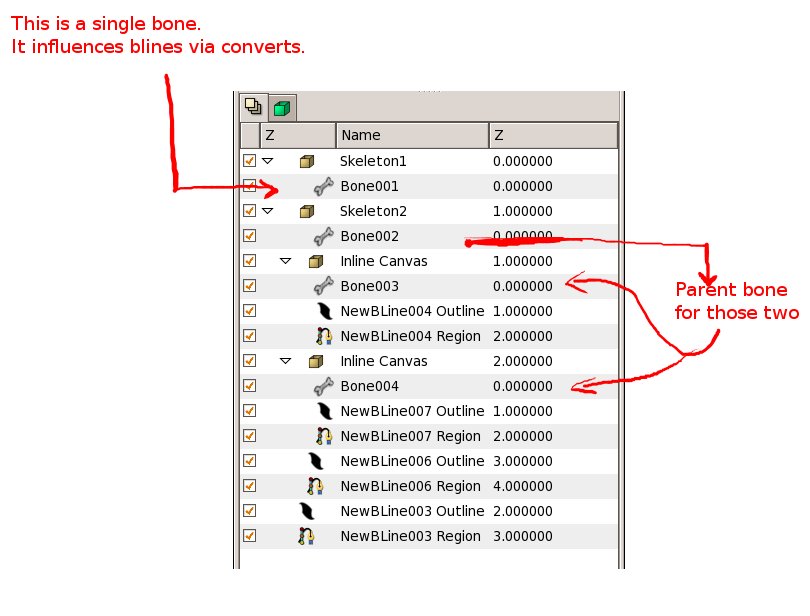 Hi Zelgadis,
first of all thanks for take the time on reply.

That’s the first thing I though when I started to consider to have bones on synfig.
This structure is good from the point of view of synfig layer concept but lacks on some of the needed
functionality that the bones should have:

The main problem with the layer concept is that layers aren’t linkable valuenodes so they cannot be part of a parameter (unless they are canvases). Look this hierarchy:

You can see that layers are directly inherited from the Node class that is the root class of all the synfig classes. If you want a Vertex to be any kind of convert type form a bone (list) then the bone needs to be a Valuenode class inherited from a Linkable Valuenode (where all the convert types needs to come from). That was the main reason to do in that way: a bone as a Valuenode and not as a layer.

In the concept that is currently developed, a bone is a valuenode that is visible in the canvas it belongs to. The skeleton layer is just a help to the user to allow group some bones (some roots or not and some children or not) for a particular reason. But selecting more than one skeleton at the same time the user can manage all the bones of the canvas at the same time.
There is not restriction of Zdepth for bones and they can act at any place where a vertex exits! I think that is much more flexible.

What we are planning to do is to allow the user to automatically bind the selected vertices according to the selected bones (in any layer). It would allow to redo the automatic binding not restricted to the top bones in the hierarchy.

Please don’t consider this a strict “no” and let me know if you need further information on how the current core bone is constructed to allow you to understand why I stand that this way is more flexible and really (due to valuenode problems) is the only possible way.

Cheers and thank you agian
-G

I hope Genete implements it…

What do you mean with “turn Things around”?

I not understood what do you meant by “allowing parent animation” in (4), but most importantly I can’t find a reasonable answer on (3).

So I think your current approach is makes more sense than suggested by me. Thanks for such detailed explanation!

16:34 Zelgadiss: with your aproeaching, parent animation means bone movement in the layer hierarchy, and it could be not practical.

16:35 but I would like to hear some thoughts about the gui. It is in a preliminary stage and any suggestion is easier to implement now than later.

What do you mean with “turn Things around”?

I mean by rotating them.

Hey, Genete! Here’s my thoughts about the concept of handling animated parent. It is related to our yesterday’s discussion.
animated-parent-proposal.pdf.zip (20 KB)

I suppose what during creation every bone will have context-menu which allows to delete bone, remove item smart, etc. I suggest to add a “Parent” menu item to context menu, which will act like checkbox and will indicate if that bone will be parent to next created bone or not. The “Parent” option in context menu will be available only when Bone tool is active (not for normal tool),

I see it much more simple:

If you look to the bline tool, you can select (high light) a duck of a vertex or a tangent during the construction of the bline. I think it can do the same exactly.

When the user select the Bone Tool there are two options:

In any of both cases:

If the user has a bone selected (the user has the origin of the bone selected) then that bone will be the parent of the next bone created.
Only one bone can be selected during the usage of the Bone Tool so only one bone can be the candidate bone. Even if more than one bone is selected, then the first one in the selection is used.
When the user adds a bone it becomes selected and its parent is unselected.
If the user want to do a different bone chain just need to select other candidate parent bone.
If the user wants a root bone just select no bone.

I think it is simpler and more intuitive.

I would like to hear your opinion.
Sorry for the late response.
Thanks for your feedback.
-G

oh well. but yay at the same time!

No idea. Nobody is working on the code at the moment.
-G

apart from this post coincident :
viewtopic.php?f=14&t=1258
I would say that if the possibility of distorting not only in enlarging in 'stretch but maybe it can simulate a 'prospective approach! the important thing and that affects only some vertices of the silhouette image and object features and internal, perhaps … maybe turn onto filling stretch and somehow extend these bones affecting the rest

When will the relay with the bones?

When will the relay with the bones?

The bones project is stopped at the moment. Current developers (2) are focusing on other things that needs to be done first.
-G