While I am still writing script for “pilot episode”, I’d like to invite any person interested to help. I will do most of the animation and editing, also script, but I’ll need additional animators for times when I am incapacitated in some way and voice actors. From what I wrote for pilot episode, I’ll need at least 3 voice actors, one for main characters (male, young boy, about 14 years old), and two female (Teacher and for main character’s friend). I’ll voice main character other friend.

I have yet to come up with synopsis (kinda hard when not everything is written down yet), so nothing here now (will edit this post when synopsis is done).

Note that I am operating on $0 budget, so payment is not an option, unfortunately.

If project will get to some substantial state, I’d like to request subforum for it to be made like one for Morevna.

Good news. Work on the script goes well. One question though, how can I calculate how much run time will be out of script? I’m aiming at 23-26 minutes runtime per episode (including opening/ending).

Started to do some animation for the opening and will work on script in few moments. Unfortunately it’s kinda hard for me to do this because Synfig is terribly slow for me. On a computer that can handle several demanding 3D games like Planet Explorers, Blockscape, SRIV, Crysis (only first one, unfortunately). Yep, sounds about right. My computer can’t handle simple 2D animation software.

So until it’ll be resolved, I’ll work mostly on the script and voice acting. And possibly create areas series takes place in as Blockscape saves to help me visualize it (Blockscape’s great game, you should play it).

…anyway I would suggest hiding your background if you wish to continue creating your scene for your animation without slowing down as it will happen regardless of your computer specs. As for judging a scripts run time you’ll have to go through it out loud and time it to know how long it will run. You would be the best person to judge it as you know how fast its being spoken, emotion and breathing between its words.

Except… it is slow with just few regions. No background whatsoever.

Hi!
Can you post the sif.file that is giving you problems speed wise. I am using a windows dev version too so maybe I can reproduce your problems.
Greetz!

edit: mind you that dev versions are far from optimal, but I also would use anything to get rid of the resize bug and multithread bug that lurks into the current stable windows version.

Hi!
I downloaded your file and you were right: 22 freaking seconds. No way you can edit a drawing let be an animation without getting insane after one minute. Lol. The 42px feathering you used on both the highlight and the shadow of the apple is the culprit here. It slows everything down. Even in low res it takes a two second redraw and that tripples or more if you zoom in, giving the same slowdown. If you really must use feathering, then I suggest you switch it of while you edit your animations and only switch it on when you want to render an example. Or, don’t use feathering at all and try to get the same effect by just using gradient layers and blur layers.
As an example I recreated your apple using gradient and blur layers and got the same result with only 0.5 second redraw (0.2 second in low res). Hope this was helpful to you in some way.
Greetz!

edit: Change the blend methods of the highlight and shadow layers from straightOnto to Onto. Otherwise the blur won’t render correct. 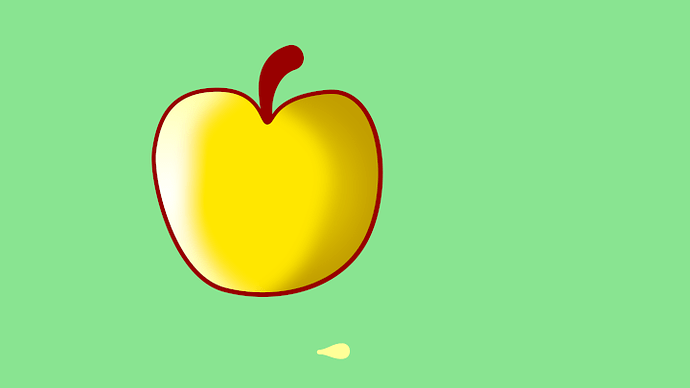 Thanks! Anyway I’ve used worst preview quality (10) which turns off feathering and it works quite well when animating (just 1s). Anyway I think this bottleneck should be fixed as Synfig isn’t even using full capacity of my processor (usage is about 25%, bit less than that).

Thanks. Project is on hold though as I have very busy schedule and hit the writer block for the screenplay anyway. Still I want to do this, but I just don’t have time. Send me message with sample of your voice so I can see if you fit any of the characters.

Is there a way to send Mp3 files over this site or should i send over your e-mail or something?

My pc broke down few weeks ago so I couldn’t send you a voice reel yet.

That’s okay. This is put on hold anyway.